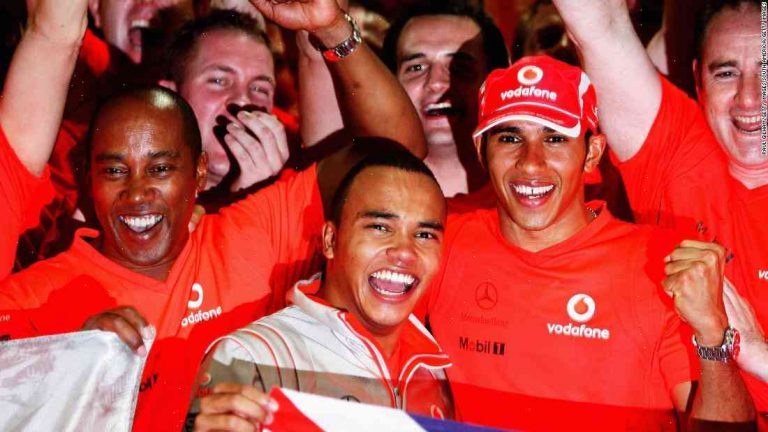 BBC Sport’s resident superman Nic Hamilton reflects on his McLaren great brother Lewis and the impact he had on the Formula 1 world in his career-defining season of 2016.

Lewis’s dominance on the F1 grid in the first half of 2016 was dominant – then came September.

Alonso made his first podium of the season, with nuggety Finnish novice Valtteri Bottas, but then both were pipped by a resurgent and confident Hamilton.

A month later, a bobbing, tangled flying tornado of a car wobbled and seemingly popped into life – he had moved up to fourth in the points and the 22-year-old’s surging form became the conversation point of F1.

That F1-bashing hero in a white helmet then became almost mythic in its ability to stick some sort of a zero on its properties, as it turned Formula 1 into entertainment in the same way as a football player.

That meant Lewis was a hero, but no longer a paragon. He was no longer a step-up, that’s for sure.

There were fine lines that year, of course, and he could have never imagined two of his three podium finishes were by winning races (did you see him overtake Vettel at Silverstone?).

But there was something about the way in which he approached the sport that changed perceptions. No longer did everyone see him as the remote heir to Nigel Mansell, or even Keke Rosberg or Kimi Raikkonen. The world saw another side to him, and that changed everything.

I remember when he came out of the snow in Austria, grinning and yelling towards the crowd. “I’m at the zoo!” he told me. When the winter was over, he admitted himself that he still fancied the idea of being a zoo elephant. And, weirdly, all the talk about Lewis was about me, too. How the sky had fallen in and my chance had gone too.

That summer and autumn was an interesting one for F1. And beyond, too.

There were too many drivers but there were not enough for four teams, which meant Mercedes were missing something.

Stewards felt we shouldn’t have asked them to remember to change their tyre valve stem during the Spanish Grand Prix, a decision that effectively made them overly cautious for race weekends.

Whichever way you look at it, 2017 was not a good year for new orders.

Ricky Stenhouse Jr, Ola Kaellenius and Jonas Ekstrom were not officially given so many chances in the second half of the season because McLaren made a genuine effort – it was their habit – to damage their cars. If they could have powered on, though, their performances should have been rewarded.

But they were not. And somehow, that was blamed on somebody else.

It was a staggering decision to make, especially by McLaren boss Zak Brown.

What Brown did was make an emphatic statement of McLaren’s intention to focus on two teams in the near future, and it comes out on top.

So it’s more pure two teams. The rest is just commercial. It’s a sad but inevitable fact of the F1 business.

There are only one or two opportunities to have Ferrari and Mercedes at the top of the drivers’ podium, and it was clear that, in both cases, they were due for big shake-ups over the next year.

Of course, Lewis Hamilton would probably get himself a bit more about 70 times as many laps. He’s the points leader for now. (And it was only after Sebastian Vettel’s struggles at the start of the year that Hamilton started overtaking again)

What is left to be said is that Lewis won his 27th Grand Prix, and he did it at Monza with a lap in which he outperformed every single other driver, and he did it with Alonso and Bottas in tow.

He made F1 history and the best drive of his life.

But now it’s time to carry on with it.

The season is not yet over, and plenty can happen. But as Hamilton said in the penultimate race:

“This year was a bit of a gamble for me and one that I hope pays off, but I want to make it a lifelong career.”