The following is from the latest edition of FOX Sports’ “Hopkins on Tennis.” Daniil Medvedev says he looks forward to competing at the 2021 U.S. Open in Cincinnati after winning his second career title… 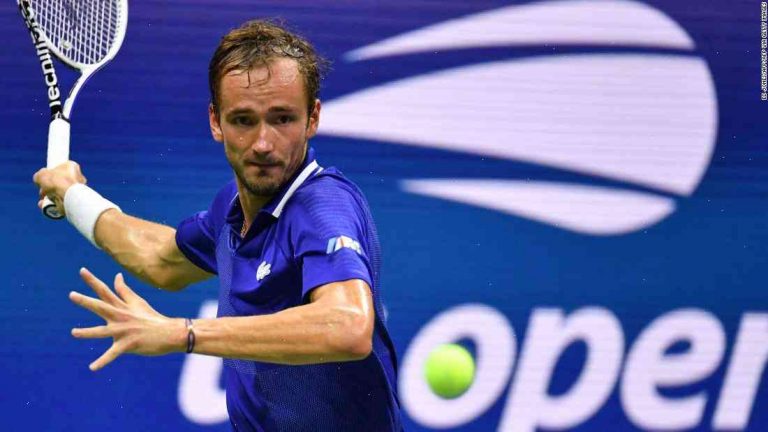 The following is from the latest edition of FOX Sports’ “Hopkins on Tennis.”

Daniil Medvedev says he looks forward to competing at the 2021 U.S. Open in Cincinnati after winning his second career title this past weekend at the Miami Open.

“The fact that I won at a major was very special. It was the first time since 2009,” the 21-year-old from Russia said at his locker Friday. “I’m looking forward to Cincinnati next year. I haven’t been there yet, but it’s going to be great playing at the U.S. Open.

“I have no doubt that if I play like I did at Miami (on the way to his third career title), this would be a successful U.S. Open.”

Medvedev saved two match points against Mischa Zverev in their semifinals, then beat Milos Raonic in a three-set title match.

He has reached three finals and nine semifinals this year, and Medvedev next plays Grigor Dimitrov in the Madrid Masters on Monday.

The tourney in his native city of St. Petersburg wraps up play next week, but the rising star insists that he has little to ponder.

“The only thing that I’m thinking about now is next week and Madrid,” he said. “I’m just trying to take this week to relax and prepare for that next week.”

Here’s highlights from his interview:

On winning at Miami, ending a 23-match winless streak:

“I don’t think I played my best match in the Miami Open. I started out well, but I didn’t hit some shots that I like. This time was an up-and-down, almost kind of up-and-down-tempo match.

“After that I was really pumped up. I went for my shots and I was feeling good throughout the match.”

On this week in Miami:

“I actually feel tired. I was feeling tired the last couple days. I don’t feel fresh this week. I’m looking forward to some rest now.”

On his birthday on May 1:

“It was a good birthday, but I couldn’t expect it to be the best birthday in the world. This was the best surprise possible, definitely.”

“I’m actually getting better at it. I definitely feel like I’m getting better. I was practicing less than the last couple of years because I had more matches, and I was working less. Now it’s a lot more, so I feel a little bit better.”

On being ranked No. 3, with the French Open just three weeks away:

“Well, it feels good. It’s nice to know that I have that kind of ranking and that people care about me. That’s always great. Hopefully I can play good and I’m playing solid.”

On spending time with his family:

“No, I’m just trying to stay away from them.”

On how his junior days with coach Lenny Zdunek have helped him: